Ridgeons  raise £3,700 for EACH during Children’s Hospice Week 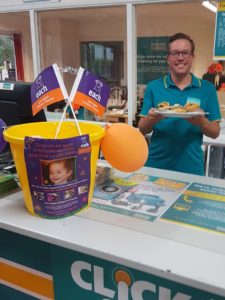 Colleagues at 14 Ridgeons branches across Cambridgeshire, Hertfordshire, Norfolk and Suffolk organised their own fundraising activities including bake sales, raffles, a 30km ‘treadmill challenge’ and a BBQ.

The top fundraising branch was Halesworth in Norfolk, where £910 was raised over five days. Second highest fundraiser was Ridgeons Saffron Walden in Essex, which raised £795 with activities including a head shave and a 30km treadmill challenge.

All 26 local branches and Ridgeons support centres have set a goal of raising £30,000 over a two-year period for EACH. The partnership began in early 2017, and the money will help EACH provide care for 360 children and young people with a life-threatening condition around the region, and support 440 family members.

Ian Northen, Chief Executive of the Ridgeon Group, said: “Once again I am delighted that many of our Ridgeons colleagues remain committed to fundraising for our charity partner, EACH. They continue to invest effort and enthusiasm into supporting this fantastic organisation alongside their jobs. As a community-focused company, we look forward to raising yet more money during the summer campaign, EACHfest, throughout July.”

Lesa Barker, EACH Head of Regional Fundraising, said: “Children’s Hospice Week takes place every May and we’re thrilled that Ridgeons, a corporate partner of ours, continues to make so much effort in their support of EACH. We’ve every confidence they will exceed the £30,000 goal!” 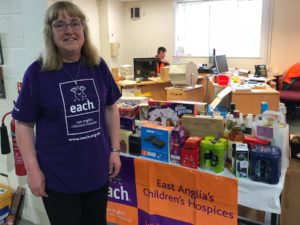 Ridgeons is one of the largest independently owned builders’ merchants in the UK and trades from 26 merchant branches in the East of England.

I'm the Assistant Editor on BMJ. If you have any product or people information, or some news you'd like to share, please feel free to email me.
Previous Knauf’s new Joint Filler
Next NM Group launches ex-offender construction training initiative