The tearoom lady called me love. All the shop ladies called me love and most of the men called me mate. I hadn’t been here twelve hours and already they loved me

There are some things that the British do better than anyone else. And Monday September 19th was one of them.

Pomp, ceremony, processions, queuing: the British just get it. The hours spent on the Embankment, just to file past the coffin of a teeny tiny queen and bow heads, the marching, the magnificent pall-bearers, the flowers, the lines of military personnel and Palace staff. The corgis and the pony. The bagpipes. The music. David Beckham sharing doughnuts and lemon sherbets with fellow queuers.

As send-offs go, it was pretty spectacular. Hats off to the unsung civil servants who pulled it all together, and to the TV companies whose cinematography and camera angles showed Westminster Abbey, London and Windsor Castle off to their best.
Those of you who know me with not be surprised to hear that I was a blubbery mess for much of the spectacle, and that the glimpse of Her Majesty’s pony, Emma, and the corgis Muick and Sandy, waiting for a mistress that they don’t quite understand isn’t coming back broke me.

In the time we have been queueing and sobbing and learning to sing God Save the King, the world has kept turning. Energy prices are still a major problem for a great many people and businesses, despite the Government help. Ukraine has, thank goodness, continued to push Putin’s bedraggled troops further back, though every inch they re-take reveals more atrocities committed by Russian troops on Ukrainians, civilians and soldiers. And in Iran, women are showing what bravery really means, by protesting against the death of 22-year old Mahsa Amini at the hands of the morality police.

The last 10 days have been like a psychological holiday for the British, a chance for us as a nation – no matter your opinion of the monarchy – to take stock of who we are, and what is really important to us. And that, it turns out, is community, friendship, family, sharing experiences – good and bad, and understanding that we are all different, but also not so very different. Something that this industry is already pretty good at. 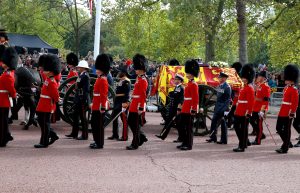 The BBC has a collection of some amazing pictures from Monday, here: www.bbc.co.uk/news/