Among the speakers were BMF CEP John Newcomb who took the audience through the latest state of play with the Federation, highlighting the fact that the trade association’s membership levels are at  a 30-year high, having just reached 850. He also released details of the latest GFK figures for sales through merchants, and announced the first Institute of Builders Merchants Conference which will take place in Birmingham in October. Benefits to membership of the Institute include: career advancement, access to specific career-enhancing resources and events, a mentoring system, and the promotion of professionalism in the industry.

Dan Hodder, the BMF’s Policy and Public Affairs Adviser took the audience through the proposed expansion of the Ultra Low Emission Zone for vehicles in London, which, he said, has been on the London Mayor’s agenda since he was elected, and is, therefore, going to happen, it’s just a case of when and in what format. The changes are likely to affect any  merchant businesses, either based inside the Zone, or which have to travel into London.

Mark Case, Carlton Manufacturing’s UK packed product manager talked about the company’s apprenticeships programme, while recruiter Natalie Chapman from Stirling Warrington gave practical advice on how to recruit in an era of low unemployment, where, for the first time in many years, there are more jobs than candidates. 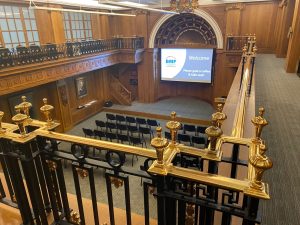