It was International Women’s Day last week and it rather passed me by. I was busy getting an issue to press, and, anyway, I’m not great on ‘days’, unless it’s Christmas. I don’t do valentine’s day, Mother’s Day, Father’s Day, and now I’m of a certain age, I’m not that fussed about my birthday either.
So, having not done anything special on BMJ to celebrate it, I then felt bad. Maybe I should be highlighting all the amazing women that I know and that are working in this industry. But, having started a list, I knew I wouldn’t know where to stop. This industry is full of amazing people, whatever their gender, who give everything they have every day to ensure that their brand is the best, that their customer service is the best that their marketing or whatever they are manufacturing is the best. It’s why we launched our awards, of course, to celebrate all that.

International Women’s Day is, of course, about far more than bigging up one’s colleagues and peers in a traditionally male-dominated industry in a first world country, I get that. The trouble is that at the moment, much of it seems self-indulgent when there are men women and children struggling through hell in Ukraine. And, let’s not forget, in Afghanistan, Syria and Yemen. None of those problems have have gone away, just because the increasingly bonkers Putin has taken another step forward in his view of Russia as an empire and not a nation.

Every day, there is more horrific news coming out of Ukraine. The bombardment of the cities, the targeting of hospitals and humanitarian corridors should surprise no one who has paid attention to the Middle East over the past 11 years; this is how Russian-backed forces behaved in Syria. The argument is that if you can’t take a city militarily, you make it a living hell for those who remain there, thus weakening civilian support for your opposition. Putin hadn’t banked on the Ukrainian determination to fight back, nor the courage and leadership qualities of the Ukrainian President, Prime Minister and the Mayors of Kyiv and Khakiv and that mistake is costing him dear.
I can recommend the blog of Professor Lawrence Freeman, who is Emeritus Professor of War Studies at King’s College London, by the way, for insight on how the war developed and where it might end

However, Putin’s mistake is also costing Ukraine dear. And the Ukrainian people, nearly 3million of whom are now refugees. The world is a terrible place at the moment, but it is also a place filled with generosity and love, evidence by the amount of aid and money heading Ukraine’s way, and by the number of people in countries all the way across the rest of Europe – and I’m including the UK in that – ready to open their homes to people who have lost everything.

So, to go back to my International Women’s Day starting point: A big shout out to all the amazing women in this industry, but I’d rather highlight a few others (clockwise, from top left):

Anastasia-Stoluk 10 years old, killed by Russian soldiers, Iryna Tsvila, killed along with her husband, by Russian forces advancing on Kyiv; Oleksandra ‘Sasha’ Kuvshynova, Ukranian TV producer, killed in an attack outside Kyiv alongside her cameraman; Olena Kurilo, badly injured when Russian forces bombed her apartment block in Kharkiv; Marina Ovsyannikova: took to Russian TV to protest the Ukrainian war and warn viewers that they were being lied to by state TV;  Nazanin Zaghari-Ratcliffe; The unknown elderly lady standing up to armed Russian soldiers in the street 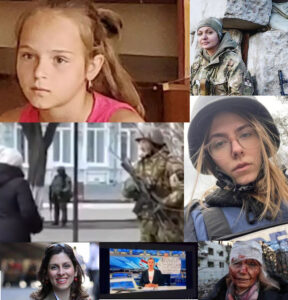 There is good news though. The best news we’ve had for a long time. Nazanin Zaghari-Ratcliffe, and Anoosheh Ashoori , who has also been held prisoner in Iran, are coming home because, and I’m surmising here, the UK government has agreed to pay the debt it has owed Iran for decades. Why now? Oil, would be my guess.

I challenge you to watch this clip of the BBC’s Joanna Gosling receiving the news and not shed a tear along with her. I didn’t manage it.