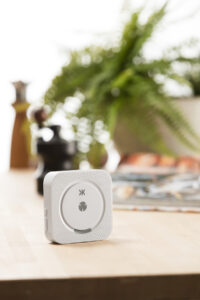 Knightsbridge is expanding its range of wireless door chimes with the introduction of new battery-powered and plug-in models.

Comprising a receiver and bell push, the chimes are easily installed, feature a choice of 58 ring tones and volume control up to 110dB. A visual alert also operates if there is too much ambient noise to hear the chime.

Additional receivers and bell pushes can be added should the installation require it, for instance in larger properties. Interference from other wireless devices is avoided thanks to the built-in learning code. And with an operating range of up to 200m, depending on environment, outbuildings or sheds in the garden can also be catered for. Further flexibility is offered by two ready-made kits, the dual entrance kit comes with two bell pushes and one plug-in receiver, while the dual receiver kit comes with one bell push and two plug-in receivers. There is also a motion-activated kit with plug-receiver and wireless motion sensor, so visitors don’t even have to ring the bell.

The wireless plug-in versions are available in black or white, while the battery-powered models come in white only. Bell pushes are IP55 rated to withstand harsh weather conditions and include a door number sleeve on the body of the device.