Premier League football Andre Gomes and the Hereford branch of County Building Supplies are two supporters of a charity campaign to help a young plasterer who has been diagnosed with cancer.

Just after Ashley Rumsey’s second son was born less than five month ago, he was diagnosed with stage four pancreatic cancer, as well a liver metastasis, a cancerous tumour which has spread from another part of the body.

Along with his partner Nikita Anderson, the pair, who live in Hereford, is now trying to raise £250,000 towards costs arising since the diagnosis, with local football clubs donating players’ match subs to the cause.

Rumsey is a customer of County Building Supplies’ Hereford branch and the merchant is donating £1 for every £10 order collected from the branch during March as well as holding a number of fund-raising events including a raffle. “He’s a lovely lad and we want to do everything we can to help him,” said County managing director Martyn Rees. “We have already had donations and gifts from Siniat, Quinn Building Products, Fakro and Arbor.”

Everton midfelder Gomes heard about Rumsey who is a fan of the club and decided to make a surpise visit to him in hospital. He spent more than six hours with the family and watched Everton come from behind to beat Watford 3-2 in the Premier League.  The Portuguese international even tweeted after his visit: “Had the opportunity to surprise Ashley, a huge Evertonian unfortunately diagnosed with pancreatic cancer. You inspired me and I’ll never forget this. Congrats team for the fantastic comeback and thank you Ashley for your strength, courage and passion.”

There is more information and the opportunity to make a donation on the family’s justgiving page: https://www.justgiving.com/crowdfunding/carolynhelen-ball-1 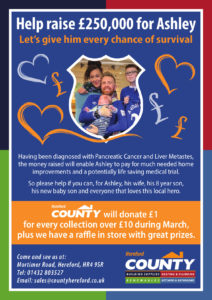