The construction sector rallied in June as output rose to its highest level since September – a marked improvement to the situation at the beginning of the year.

The seasonally adjusted IHS Markit/CIPS UK Construction Purchasing Managers’ Index® (PMI® ) posted 53.1 in June, up from 52.5 in May and above the 50.0 no-change value for the third month running.

The latest reading shows the sharpest overall rise in construction output since November 2017, with residential work performing best and commercial building also contributing to the stronger overall rise, at its fastest pace since February.

At the other end of the scale, civil engineering activity rose only slightly in June, with the rate of growth easing to a three-month low. The rate of new business growth was the strongest for just over one year in June. 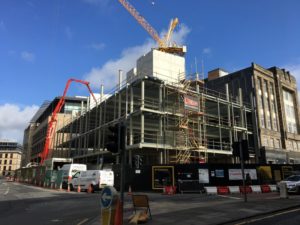 The rise in input prices was the steepest for nine months, which construction companies attributed to greater transportation costs and higher prices for metals (especially steel). Meanwhile, lead times lengthened again in June, driven by low stocks and capacity constraints among suppliers.

\there was also a rebound in business optimism from May’s seven-month low, although positivity was much weaker than it has been on average in the longer term.

Tim Moore, Associate Director at IHS Markit said: “The latest increase in UK construction output marks three months of sustained recovery from the snow-related disruption seen back in March. A solid contribution from house building helped to drive up overall construction activity in June, while a lack of new work to replace completed civil engineering projects continued to hold back growth.

“Of the three main categories of construction work, commercial building was sandwiched in the middle of the performance table during June. Survey respondents suggested that improved opportunities for industrial and distribution work were the main bright spots, which helped to offset some of the slowdown in retail and office development.

“Stretched supply chains and stronger input buying resulted in longer delivery times for construction materials during June. At the same time, higher transportation costs and rising prices for steel-related inputs led to the fastest increase in cost burdens across the construction sector since September 2017.”