As part of the opening celebrations for the branch on North Phoebe Street, a Selco Stars campaign was launched inviting entries from community groups and charities to receive a £1,000 cash boost. Salford Women’s Centre was selected as the winner by a panel of judges.

In addition, a further £2,000 was pledged to Selco’s nominated charity Global’s Make Some Noise, a national organisation which assists small charities across the UK, including Manchester-based Once Upon A Smile and Trafford Domestic Abuse Services.

Salford Women’s Centre was formed 30 years ago and aims to support females in the local area with their health and wellbeing,

Alison Taylor, manager of Salford Women’s Centre which is based on Halton Bank, said: “We are absolutely thrilled to have received the donation from Selco and it will make a huge difference to how we can support the local community during these difficult times. Much of our work is supporting women emotionally and practically in terms of housing, safe space and safeguarding, and helping them through the judicial process. But we always aim to offer an all-round package so we make other services available, including post-natal support and educational classes. The £1,000 investment will provide 30 counselling sessions and 10 emergency comfort packs for women who have fled with nothing but what they are wearing.”

“Supporting charities and community groups in the local areas in which we operate is an integral part of the Selco ethos so we are delighted to mark the opening of our new branch with a £3,000 donation. We hope the funding will make a real difference to very worthy causes.” 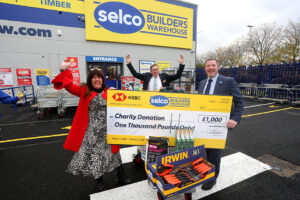