In early December, Corporal Jack Jarvis embarked on a challenge of epic proportions to support people with a brain tumour: rowing across the Atlantic, taking a route that has never been attempted solo before. The route is 4,500 nautical miles, and will take him almost 100 days to row. It is an official Guinness World Record attempt and will push Jarvis to his absolute limits. Jarvis, who is taking the challenge in memory of his grand-father Budgie, who died of a brain tumour, grew up with the son of Blue Rock Systems’ director Glen Jewell. 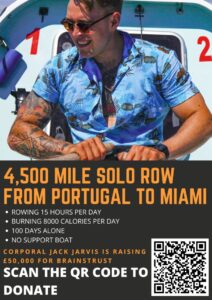 He is currently half-way through the trip; around 300 people in the UK will be diagnosed with a brain tumour in the UK by the time he has completed it.  With every mile of this treacherous journey, battling isolation, exhaustion and the elements, Jarvis is funding vital support so these people and their loved ones feel less alone.

The row started from Mainland Europe (Portugal), goes past the Canary Island and the Dominican Republic, and finishes in Mainland America – near Miami.

He is the only person to have ever attempted this route and will become a Guinness World Record holder if he completes it.