Industry focus was the main part of the second day of the Builders Merchants Federation conference in Dubrovnik last weekend (June 13 to 16 2019). 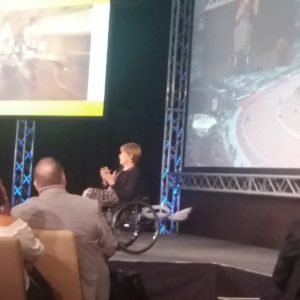 The session opened with presentations from a national merchant, a major independent, and manufacturer, followed by the opportunity to attend two of four break-out sessions on marketing, young merchants, mental health and plumbing and heating.

Following the announcement of the venue for next year’s NMBS Conference, the next speaker was Parliamentarian and former Paralympian Baroness Tanni Grey-Thompson DBE, Team GB’s most successful Paralympian, with 11 gold medals, 4 silver and a bronze. She is now a cross-bencher, sitting in the House of Lords, having been made a life peer in 2010.

She spoke of the struggles she had a disabled child and the efforts her parents went to to ensure she had a mainstream schooling and a mainstream upbringing – even though she was once barred from a local cinema for ‘being a fire hazard’ due to her wheelchair. “My mother taught me the response to that: I’m not going to spontaneously combust”

Grey-Thompson’s speech covered a wide range of topics from her competitiveness with the husband and coach, Ian Thompson, her participation in the opening ceremony of the London 2012 Olympic Games and the challenges of parenting a teenager when your athletic career takes you halfway round the world for weeks at a time. She touch on the importance of having a good team around you, of aiming to be the very best you can be and how it’s important to remember that the medals are won not just by 20 minutes on a track, but via the hours, days, weeks and months of training and hard work leading up to those 20 minutes.

John Prescott, the UK’s longest ever serving Deputy Prime Minister, finished the conference with a speech that ranged from what happened when he thumped a protestor who attacked him with an egg to the current political climate and the chaos therein. “Different parties with different individuals still can’t come to an agreement”, he said, adding that Parliament currently has “plenty of intelligence, but no common-sense” and that “the public is entitled to a much better government than what we are seeing”.

The problem, he said, is that politics has changed over the 60 years he has been involved in it. “It’s all about the careerists now. Not about commitment or conviction.”