It is with great sadness that Nicholls & Clarke has announced the death of Ken Forbes, who peacefully passed away at his home on July 28. 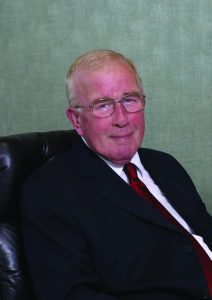 Forbes joined Nicholls & Clarke in 1956 at the age of 18 as an accounts clerk and worked his way through the business, spending 14 years as a sales representative before being asked by Sam Nicholls to join the Board of Directors. He became Chairman of the Nicholls & Clarke Group in 1991. During his period as Chairman, he oversaw the modernisation of the business into the diverse business it is today.

Many of the existing team were personally recruited and promoted during his tenure. Forbes was greatly respected throughout the industry. The Nicholls & Clarke Group will always be indebted to his vision, drive, and leadership.

After 63 years of service Forbes retired in 2019. He was a much-loved Father, Grandfather to seven Grandchildren and recent Great Grandfather and will be missed by everyone who knew him.

A private family cremation will be followed by a Thanksgiving Memorial Service, on August 31 to remember and celebrate his life.