The Builders merchants Federation Young Merchants group has a new leadership team, elected at the  at the BMF Young Merchant Conference held this year at the NEC, Birmingham. 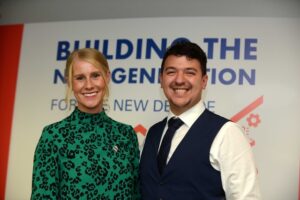 Jo Callow, head of communications for UK & Ireland at Knauf Insulation is the new chair, supported by Ed Parlato, buyer at Browns Builders Merchants, who was elected to replace Callow as Vice Chair.

Callow takes over from Glenn Paddison, who has completed his term as chair, having been vice-chair previously. She has been an active member of the Young Merchant Group for seven years, serving as vice chair since 2018.  She joined the Group after winning the BMF Young Supplier Achiever Award in 2014, just a year after she entered the building materials industry as a member of Knauf Insulation’s Merchant Support Team, and continued to work closely with merchants in her subsequent roles at Knauf Insulation as area sales manager and national merchant support Manager. She was promoted to her current role in 2020.

She said: “I am delighted and honoured to take on the role of Chair and looking forward to working with Ed to build on all that Glenn achieved during his chairmanship. The current drive to achieve net zero makes this a particularly exciting time, offering even more opportunities for young people entering the industry.  I know from my own experience how the interaction within the Young Merchant Group helps members as they build their careers. Our focus will be on delivering quality events to support this.”

Vice Chair Parlato, is currently involved in the purchasing side of Browns an independent, family run merchants in Derby, but has tackled many other roles in the business over the years.  He is also part of the NBG Category Management team for tools and workwear.

He said: “The Young Merchant group has grown enormously in the past few years.  When I first joined there were 20 people at the meeting, the latest Conference had over 150.  Every Chair has built on the work of the last and I’m looking forward to working with Jo and supporting her over the next two years, and I will be listening to members of the group to make sure their views are represented. If the last 18 months has shown us anything, it is to expect the unexpected. I always marvel at the intelligence and creativity of all the people in Young Merchants, and I hope I can capture part of that to share with the wider industry.”

The BMF Young Merchant Group supports merchants and suppliers aged between 18 and 40 in their career development. Membership is open to those holding a key management position within their organisation.  They benefit from twice yearly meetings and networking events, and an annual fact-finding trip, normally overseas.