Founded in 1971, Alloway Timber supplies traders in London and Surrey from its locations in Putney, Fulham, Kingston, Cheam, Mitcham and Byfleet with premium timber products.

In 2003, PBM Builders Merchants was launched from a single depot in Putney. Since then, the business has grown to 3 depots across London and Surrey, opening its second location in Kingston in 2006 before adding a third in Byfleet in 2012.

In 2019, Alloway Timber & PBM Builders Merchants set out on a new strategy that brings both working closer than ever to bring service excellence to their shared customers and become the preferred merchant in South London and Surrey. The three-year initiative will take the company through to its 50th year and focuses heavily on simplifying the business and delivering service excellence throughout the customer journey. 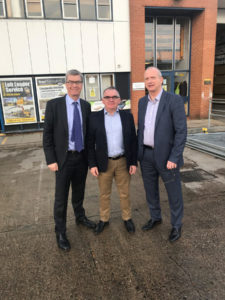 Finbarr Doyle, managing director at Alloway Timber & Putney Builders Merchants, said: “When it came to choosing a buying group, NBG was an obvious choice. Our core values chime with NBG’s and the emphasis we place on people, relationships and loyalty are definitely aligned.

“NBG succeeds due to its approach to supplier partnerships. While other groups pressure suppliers for the best deals, NBG focuses on building lasting relationships and understands that sometimes the best deals are delivered through partnerships, not pressure.”

National Buying group was formed in 2003 and harnesses the power of collective buying by bringing the UK’s independent merchants together to develop lucrative business opportunities, overcome industry challenges and build lasting relationships with suppliers, as well as each other.

Group Managing Editor across the BMJ portfolio.
Previous Two steps forward (one step back?)
Next Mates in Mind calls on industry leaders to transform mental health