Independent builders merchant group Lords Group Trading plc has announced its intention to list on the AIM market of the London Stock Exchange.

The company wishes to raise new equity to provide more flexibility and funds to continue its current and future growth ambitions, both organic and inorganic. The funding will also allow current Lords shareholders to sell a proportion of their current shareholding.  The share placing has been oversubscribed, having received strong support from institutional investors and will raise a total of £52.0 million, with the Group valued at around £150 million on Admission. On Admission, the Company will have 157,503,947 Ordinary Shares in issue and a free float of approximately 34.5 per cent.

Shanker Patel, Chief Executive Officer of Lords Group Trading plc, said: “We are delighted to announce our plans to join the AIM market.  The entire team has worked hard to establish Lords’ position as a leading distributor in the UK building materials market, and it is this ability and ambition that will allow us to capitalise on the significant opportunities ahead.

“The RMI market in particular has huge potential and is supported by a number of short, medium and longer term growth drivers.  We look forward to continuing to grow our business as a publicly quoted company.”

Lords was established over 35 years ago as a family business with its first retail unit in Gerrards Cross, Buckinghamshire.  Since then, the Company has grown to a business operating from 33 sites with a combined turnover in excess of £288 million.  The Group aims to become a £500 million turnover building materials distributor group by 2024 as it grows its national presence.

In the last five years, the group has expanded via the acquisition of a number of merchant businesses including: George Lines, Hussey & Saunders, Hevey Building Supplies, Kings Langley Builders Supplies, MAP and, in April, Condell Ltd. This latest acquisition took the group south of the River Thames for the first time and the branch has now been redeveloped under the Lords banner. 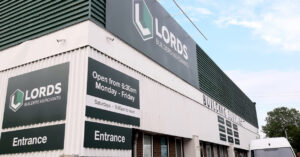 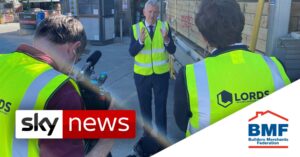