On the 21st October 2022, Richard Hill was installed as the new Master of the Worshipful Company of Builders’ Merchants (WCoBM) at one of London’s historic Livery Halls – Stationers’ Hall. During his year in office, the Master will be supported by Senior Warden Alan Hawkins and Junior Warden Stephen Boyer. The prestigious Installation ceremony also acknowledged the role of other Court Assistants, including Lucia Di Stazio as new Keeper of the Roll and Liveryman Steve Durdant-Hollamby as new Court Assistant. 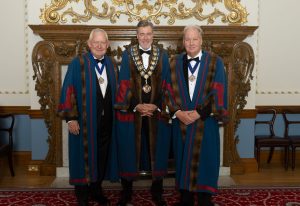 Following the ceremony, the Master and his wife Katja were joined by over 200 Liverymen, Freemen and guests at a formal drinks reception and dinner to celebrate the occasion. Entertainment included an outstanding performance by singers and musicians from the Royal Academy of Music. The guest speaker during dinner was Lieutenant Commander Robert Laverty, RN, former Commander of HMS Tyne, HMS Clyde and HMS Forth.

The Master is currently Chairman of the Builders Merchants Federation and Vice Chairman of ACO Technologies plc, a global manufacturer of water management systems. He became a Liveryman on 24th October 2013 and was invited onto the Court in 2016, the path to becoming Master.

During his Installation speech the Master confirmed his focus to build on the philanthropy of the Company and encourage Liverymen and Freemen to offer their skills and experience in mentoring new people entering the sector.

He said: “It’s an absolute honour to represent the Company and our industry for the ensuing year, and a huge thank you to the Immediate Past Master, Andy Williamson, for all his hard work, high energy and commitment during his year in office.

“During my Master’s year, I will be championing the important role of mentoring. We have plenty of retained experience around us and I would like to encourage those with that experience to actively support the next generation of young people joining our industry and hoping to develop their careers.

“I will also do my utmost to continue the good work of Past Masters in raising the profile of WCoBM and that of builders’ merchants within the City and the Livery movement.”

Group Managing Editor across the BMJ portfolio.
Previous What a surprise…oh, wait
Next Rockwool ups the efficiency ante with new trade insulation range