Greater Manchester-based Henshaws has taken over a new site in Rochdale, with the acquisition of R&M Roofing & Building Supplies. 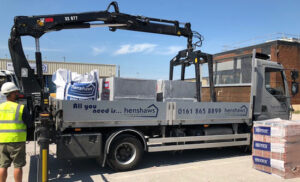 The 36 year old Henshaws is a member of independent buying group h&b, and is already well-known in its original Stretford base, especially for roofing supplies. So when managing director Adrian Shelley heard from a h&b supplier that R&M was available, the synergies were obvious: a large site, a specialism in roofing, a strong independent ethos, and an established team. At the same time, R&M was keen to team up with a properly independent merchant with strong community values.

Shelley says that the membership of h&b was invaluable when it came to rebranding and restocking the new Rochdale depot. “We called h&b and they were straight on the case. A fellow member across the country helped with bricks and blocks, the h&b HQ team were also incredibly helpful at a busy and stressful time. To feel that support, as an independent merchant, is invaluable,” he says.

Henshaws is also using h&b deals and assistance from h&b suppliers to build different aspects of the Henshaws business: developing the company’s landscaping offering for instance which has shown strong growth in the last 18 months. “We are using h&b’s expertise, relationships and skills to leverage our success at this exciting time for the Henshaw business.”

Group Managing Editor across the BMJ portfolio.
Previous Huws Gray buys Exall and Jones
Next Travis Perkins on track for profits ahead of expectations