Cancer support charity Maggie’s Centres is hoping for plenty of goal action in the Highland League this season after sponsors GPH Builders Merchants pledged to donate £40 for every goal scored in this season’s Highland League Cup.

GPH Builders Merchants has made the commitment ahead of the competition’s first round fixtures this weekend, with goals scored from this stage of the tournament through to the final eligible for donations. The merchant, which has branches in Inverurie, Stonehaven, Ellon and  Westhill, already sponsors the Aberdeenshire and District Football Association’s Under 21 League, and has also arranged for bucket collections in aid of Maggie’s to take place at each fixture, with more initiatives planned for later rounds of the competition. 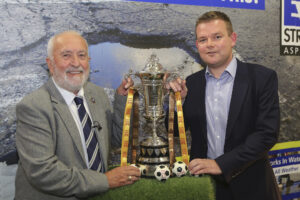 Managing director Grant Shewan said: “The company celebrates its 40th anniversary next spring, and we wanted to mark it by showing our support for the community and the great work that goes on at Maggie’s Centres across the country. By donating £40 for each goal, we are hoping that will not only lead to high-scoring entertaining matches for supporters to enjoy, but also provide a great cash boost to Maggie’s. We don’t want to be a passive sponsor and just put our name to the trophy. We are commited to the communities we operate in and if supporting fantastic a charity like Maggie’s in any way helps those affected by cancer, as well as their families, then we will be delighted.”

Goals scored during 90 minutes by Highland clubs will go to the Maggie’s Highlands centre in Inverness, Aberdeenshire teams to the Maggie’s Aberdeen facility, while money from any Brechin City goals will be donated to Maggie’s Dundee.

Richard Stewart, Centre Fundraising Manager at Maggie’s Aberdeen, said: “We are incredibly grateful to GPH Builders Merchants for the support, and look forward to seeing lots of goals scored. We rely on donations to run all of our centres, and without the iniatives like this, we wouldn’t be able to provide the services we do to those affected by cancer, as well as their families.”

Highland League President George Manson said: “The first round of any cup competition is always an exciting time, with all teams having designs on lifting the trophy. However, with this fantastic gesture from GPH Builders Merchants there is added reason for our teams to go for goals, and I’m sure the fans will be willing them on to find the back of the net.”

The draw for the second round of the competition, made using a cement mixer, takes place on Thursday, November 18 at Maggie’s Highlands in Inverness.