“You are old, Father William,” the young man said,
“And your hair has become very white;
And yet you incessantly stand on your head –
Do you think, at your age, it is right?”

Here’s something that will send a bit of a shudder through those of us born in the 1960s and 1970s. My secondary-school-age nephew was talking about some of the history projects he did while he was a primary school. The one he enjoyed most, he informed me, was “the 1980s because Mum remembered so much of it”. He said this in that tone of voice that children have, that implies anyone beyond voting age is as old as the hills and clearly past it.

My response was: “Well of course she remembers the 1980s. That’s because they were only yesterday!” I’m sure I’m not the only person who makes a joke or a comment referencing something that to me, happened but recently, only to find the rest of the office looking at me perplexed, as I realise that whatever I was referring to happened long before they were sentient and that they had no frame of reference for.

That said, there is often an equally silent response from me whenever someone in their 20s or 30s refers to someone who has risen from the depths of media obscurity via some reality TV programme or soap opera, or is one of the myriad all-look-and-sound-the-same music acts that my daughter listens to.

A disconnect between the generations is nothing new, of course. From the moment when the concept of a teenager was invented in the 1950s, there have been older generations rolling their eyes at the behaviour or attitude of youngsters. How often have we heard someone write off younger workers as ‘millennials’ for having a different attitude to work or an approach that doesn’t tally with the way things have always been done? Equally, how often have we heard older workers referred to as dinosaurs, or set-in-their-ways, and their perspectives dismissed as a result?

We talk a lot about the need for diversity in this industry and that, usually, means getting more women into the industry at all levels. It should mean much more than that. Truly diverse workplaces have a mixture of genders, ages, ethnicities and experiences. Such businesses will have a broader range of thought and of perspective and of experience, and they will be the richer for it.

Every year, when I am privileged to be part of the judging panel for the Young Achiever Awards, I am blown away by the quality and commitment to improving themselves and their businesses of the young talent we have in this industry. It was no different this year and the process of whittling down the names gets harder each time.

The BMF’s Young Merchants Forum has nurtured some amazing talent over the years – it counts CEOs, Presidents, country managers and managing directors amongst its alumni – and continues to do so. That was evident last week at BMF Members’ Day, when the Young Merchants’ section set the bar extremely high for poor old Squadron Leader Jon Peters to follow. The fact that he met that challenge head-on with a story that’s 28 years old yet is as relevant and fascinating as the first time I heard it, is testament both to the power of the story and to his as an orator.

Last year’s Merchant Young Achiever winner was RGB’s Sarah Daniels. Her impassioned plea to the industry at BMF Members’ Day for youngsters in this industry to be welcomed, mentored and taken seriously was only the second standing ovation I can remember from a BMF event – the other one being for the remarkable army veteran Stewart Hill. Coming just a day or two before the remarkable Greta Thunberg’s dressing down of the adult world at the United Nations made me acutely aware that we have a job still to do to ensure that we take the younger generations’ concerns and ideas seriously. Equally, younger people in the industry – and the world- need to know that there is a lot of experience and knowledge that shouldn’t be discounted just because it’s older.

Although some of it probably should be… 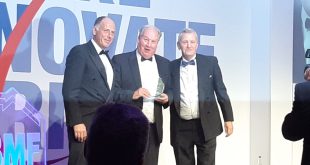