I spotted my neighbour the other morning, unplugging his electric Volvo before heading off through the misty morning to wherever it is he works. That car is always either being driven or being charged-up, the charging cable snaking out towards the garage like some mechanical umbilical cord. Times have changed. Some 70 years ago, London was hit by an environmental catastrophe. Foggy London Town, the London that was gradually rebuilding itself after the war years, the Blitz and the shortages of the immediate post-War years, was hit with a massive fog. The foggiest, densest of fogs in a city that was pretty well known for its fogginess.

The Great Smog was a blanket of thick, filthy, toxic smog, a combination of industrial pollution, domestic coal fire burning and unusual weather conditions. It lasted four days from December 5 to 9 1952.

Visibility was reduced to less than a metre in places, and so the city was at a virtual standstill. An estimated 12,000 Londoners died, including babies, people with respiratory problems and the elderly. More than 100,000 people became ill, with many hospitalised. My mother talks of walking along Piccadilly by  keeping one hand on the buildings at the side, lest she accidentally step out into the road.

It was the worst pollution incident ever in Britain, and out of it grew the Clean Air Act of 1956, which  introduced ‘smoke control areas’ in towns and cities in which only smokeless fuels could be burned. By shifting domestic sources of heat towards cleaner coals, electricity, and gas, it reduced the amount of smoke pollution and sulphur dioxide from household fires.

The world has changed since then. No longer are houses in our towns and cities completely heated by coal or wood-burning open fires. The big thick fogs have gone for the most part. But how many of us have come home from a day in London, or Birmingham, or Manchester with the heavy, chesty feel, where your lungs just feel a bit, well grubby and dingy?

We need to reduce the number of pollutants in the atmosphere but saying so is far, far easier than doing it. Fuel is £7.20 a gallon, yet we all still jump in our cars for journeys that we probably don’t need to make, or could make in other ways, if there weren’t train strikes and bus strikes every other day. I’m as guilty as anyone of popping up to the shop in the car when, with a bit of planning, I could easily walk it.

We have eight years until we can no longer buy brand new petrol and diesel-fuelled cars, 13 until hybrids too are banned. There are more and more electric cars on the roads, but charging and battery infrastructure needs to be much better if all this is to make any real, lasting difference to our lives and our lungs. There’s a lot of talk about our existing housing stock at the moment, and how difficult it is to fully insulate much of it. It’s equally hard to charge up an electric vehicle when you live in a Victorian terrace with free-for-all on-street parking and you never ever get a space outside your house.

The solution, is, as always, going to be a hybrid (see what I did there) of Government investment, private investment and public mind-set changing. Whether all that will happen by 2030 and 2035 remains to be seen. 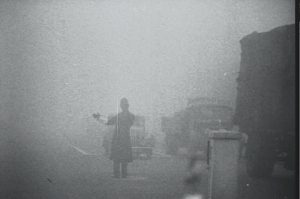 Group Managing Editor across the BMJ portfolio.
Previous Planning for winter
Next A I M’s new website and technical guides