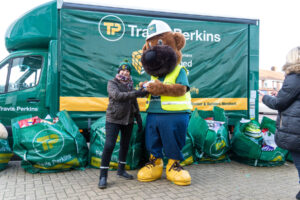 The eighth Travis Perkins and Northampton Saints Christmas Toy Collection, which this year also collected food items for seasonal hampers for disadvantaged families. Supporters and colleagues spent up to £10 on a new toy, gift, or five food hamper items to put in a festive Christmas bag.

Donations were made at Saints’ Gallagher Premiership fixture against Bath Rugby on December 4, with supporters dropping them off at one of multiple points around cinch Stadium at Franklin’s Gardens. Travis Perkins colleagues and customers also used their local branches and offices to drop off hundreds of toys and items in advance of Saturday’s game.

Travis Perkins managing director, Kieran Griffin, said: “We are so proud to be part of the Big Toy & Hamper Collection once again this year, and to be able to help families, young people and children in our community to have the Christmas they deserve. This year our colleagues, customers and Saints’ supporters have generously donated hundreds of toys for the Northamptonshire Children’s Trust and Northampton General Hospital’s children’s ward. We’d like to thank everyone who takes part; they should know they will have made a real difference to a family, child or young person who really needs it.”

Ulundi Makhanya, head of commercial partnerships at Northampton Saints, said: “We’re delighted to have teamed up with Travis Perkins again for the Big Toy & Hamper Collection in what is the eighth year of delivering the initiative together.”

“After what has been an undoubtedly difficult year for many families and young people, initiatives such as this are hugely important and we’re incredibly grateful the generosity we receive year-on-year from our supporters and to the hundreds of people who brought along their donations to this season’s toy drop-off.”