Time’s up for Boris, surely?

You never really understand a person until you consider things from his point of view
… until you climb into his skin and walk around in it.

On balance, I think I have changed my mind. Last week, I wrote a piece which looked at the issue from both sides of the fence, sat on said fence for a while and then climbed down onto one side. With everything that has happened in the past week, in particular in Parliament yesterday evening, I now seem to have climbed back up and over the fence and am hanging off the other side. Not quite settled on that side, but pretty close.

It’s the lack of empathy that I think has really got to me. If you are going to run a country and make laws that affect people, you really should try hard, very hard indeed, to understand how those laws will affect people. Not blithely assume that laws and rules don’t apply to you and that you yourself, by dint of your very ‘you-ness’ need not adhere to them.

In any case, there are two points about this whole “Boris Johnson parties in Westminster during Covid” issue, which strike me as pertinent. Either, he knew that he was attending, even hosting, get-togethers that were against his own laws, and subsequently lied to Parliament about the fact that ‘all guidance was followed’ (it really wasn’t Boris, seriously). Or, he really didn’t think that there was anything wrong with a few work colleagues having some drinks together on more than one occasion because they’d been working jolly hard and it would be nice. In which case he is an idiot. Neither scenario exactly screams ‘ fit for the office of Prime Minister’; to my mind.

I feel a bit sorry for the Chancellor who’s been fined for the occasion when he beetled up early for a meeting with the PM, and found himself at a party. Hoist by his own punctilious petard, poor Rishi had a choice between accepting the cup of tea shoved into his hand or turning on his expensively-shod heel and walking away. A well-brought-up chap, he chose politeness over rudeness, and has paid the £500 consequence.

All this hand-wringing is a colossal waste of time, energy and brain-power when there are so many other really, really important things to concentrate upon. In Mariupol, a Ukrainian marine commander has issued a video saying that his men would not surrender. “This is our last address to the world. It is possible that we have just days or hours left”. Every day, every hour, the news wires throw up more devastating, heart-breaking images. Yet still the Ukrainians fight on. Still Zelensky stays on the ground in Kyiv, urging his people not to give in, and lambasts the West for not giving them enough of the fire power they need.

This is what we still need to be concentrating on. Giving the Ukrainians what they need to fight the Russian advance. This isn’t about a country that’s somewhere off the Black Sea, this is the front-line. If Putin gets his Victory Day 2022 parade on the back of the destruction of Ukraine, what will he be trying to get sorted for Victory Day 2023 – Estonia? Lithuania? Finland? Poland?

Once again, I highly recommend Comment Is Freed, (https://samf.substack.com/) the substack blog from Sam & Lawrence Freeman who both understand and write better about this war and what it means for the West than I can.

I also urge you to read this, a first-hand, eye-witness report of what’s happening in Kyiv. It’s harrowing, yet strangely positive. The spirit of the Ukrainians is astonishing. https://www.rollingstone.co.uk/politics/features/how-ukraine-won-battle-kyiv-14872/ 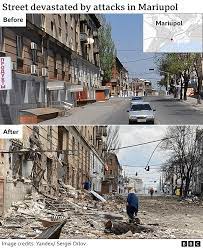