Imported volumes of timber and panel products rose to record levels of over 3.2 million cu m in the three Summer months alone, according to figures released by the Timber Trade Federation.

August was the third consecutive month when import volumes exceeded one million cu m. Softwood imports in June, July and August 2021 were 33% higher than the same months in 2020, when demand for softwood began to recover during the first lockdown.

A broader spread of countries have also been supplying this softwood to the UK in these three months as compared to the same period in 2020, with imports from Latvia up 53%, Germany by 93% and Canada by a whopping 195% .

Other product groups followed similar trends, with hardwood imports rising by 30% with substantially higher volumes arriving from the Baltics, Croatia and Hungary. 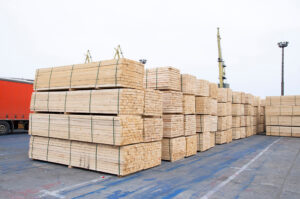 David Hopkins, CEO of the Timber Trade Federation (TTF), said: “The timber industry has gone through a period of unprecedented demand through summer as people invest in home improvements and maintenance.

“The changing trade patterns seen here show a resilient and innovative timber supply chain that is capable of harnessing new markets to satisfy the high domestic demand seen throughout the summer.

“As mentioned in our recent market statement, we expect demand to slow further in Q4 and in the new year as colder weather and post-Covid restriction spending habits ease demand for RM&I and private housing.

“It is likely however that demand for timber will remain strong as the government looks to achieve climate targets, particularly as they emerge from COP26 with firm international commitments.

“Timber is essential to building low-carbon in the UK, and this is reflected in the recent Net-Zero Strategy with the Government endorsing a policy plan to increase the use of wood in construction.”