The love of money

All that glisters is not gold

There is so much going on in this industry at the moment, so much to write about and think about. There are anniversaries of long-standing family run companies, there are energy-intensive manufacturers investing in the sustainability of their processes and there is the march of private equity. Then there’s the aftermath of the Grenfell Fire, Phase 2 of the inquiry into which starts up again this week, and the cost-of-living crisis which Rishi Sunak may or may not do something to alleviate in his Spring Statement. All of which makes for great editorial copy.

So why do I find myself unable to commit words to any of these issues? Instead, every day I find myself tugged down into the depths of the news coming out of Ukraine. Every morning my first check is on Twitter to see whether Volodymyr Zelensky, the Ukrainian president and a shoo-in for Time magazine’s Person of the year surely, has survived another night. My second check is for the huge number of journalists that I now follow on the social media platform, who are out there in bunkers, in shelters, on the streets in some cases, risking their lives to ensure that the news of what is happening out there gets to us.

What is it about this war that has touched me so much? I don’t understand it myself. Maybe Ukraine just feels so much closer than Gorozy, than Chechnya, than Syria or Afghanistan. Maybe because I’ve been to Russia on holiday and have the Babushka dolls and the bust of Lenin paperweight to prove it. Or maybe it’s the way that the Ukrainian people are taking arms against their sea of troubles, willingly, cheerfully, in some cases wittily. The images of the Russian tanks being dragged along by Ukrainian tractors for example.

It’s like we are watching the Ukrainians play their very own game of Call of Duty. Only in this case, the gunshots are real. Maybe that’s why we’re so invested in it, because we’ve  either played those games ourselves or watched our teenagers blasting seven bells out of someone on the screen. Are we becoming inured to all the bloodshed? Actually, I don’t think we are. The huge response to the Ukrainian refugee crisis, from people in the UK as well as those nearer the front-line is humbling and heart-warming, even though it probably can never be enough. 6.5million people have had to flee their homes, homes that, in many cases have been crushed beneath the battering of Russian arms. I can’t even begin to imagine what it must be like for the people who are left in Mariupol.

There is, finally, it seems a dawning realisation that we allowed this to happen. We in the West – and, I have to say, London in particular, were so dazzled by the thought of all that lovely Russian lolly that we turned the proverbial blind-eye to what was actually happening. I’ve said this before and I will keep on saying it. The letter written by Carl Scott, former defence attaché in Moscow that is published in today’s Financial Times (see screenshots below) make this only too clear. It is a powerful and damning indictment.

I really don’t know how this is going to pan out. We can cheer on the plucky Ukrainians, firing on Russian tanks with British -made anti-tank weapons all we like, but the reality is that, like that proverbial cornered rat, Putin will, if not stopped, bring out the big guns. The chemical weapons, God forbid, the tactical nuclear ones. And at the weekend, there was a report – possibly true, possibly propaganda – of a ‘great terror’ to be rained down upon those in occupied areas who dare to continue to protest. This, an intercepted letter seemed to imply, could mean scaring protestors off the streets, presumably by killing them, and then going door-to-door, grabbing people in the middle of the night.

We all know where we have seen that sort of action before. Those who do not learn the lessons of history are doomed to repeat them. 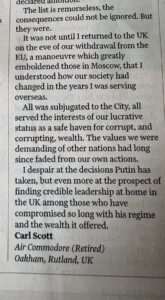