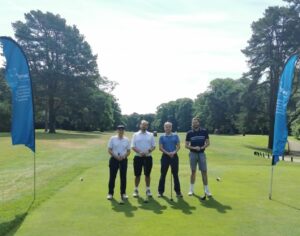 A raffle and a Beat The Pro Challenge was held as part of the event, raising a total of £1,370 for TG Lynes’ charity of the year, Noah’s Ark Children’s Hospice.

Laura Janaway, marketing manager at TG Lynes, said: “The Charity Golf Day is always one of the highlights of the fundraising and social calendar.

“This year was extra special as we mark our 110th anniversary and we managed to raise more than ever before.

“A huge thank you to our generous and supportive suppliers who dug deep to raise a fantastic amount, which will make a big difference to Noah’s Ark and the invaluable work the charity does.”

TG Lynes added extra excitement to the day by offering players the chance to win a sparkling new Vauxhall Vivaro Van, worth £30,000, if they scored a hole in one at the 176-yard 17th hole. There were also prizes up for grabs for an ace on the remaining par threes, including a three-night golf holiday.

Janaway added: “Though no-one managed to hit a hole in one and win the van, the competition certainly added an extra buzz around tee shots on the 17th.

“One of our players won a £100 golf voucher as a competition winner but very generously donated the value back to our chosen charity.”

Natasha Davis Whitehead, marketing and communications manager at Noah’s Ark, said: “We’re thrilled to be TG Lynes’ charity partner and thank everyone for taking part in this wonderful golf day at one of England’s most prestigious courses.

“Support from companies such as TG Lynes makes a very significant difference to the offering we can provide, particularly in the wake of the pandemic which has stretched the resources of all charities.”