From the sublime to the ridiculous there is but a step

Well, that was a weird weekend. I’m pretty sure there were lots of newsworthy things going on the world that would have been a better start to my Friday morning than seeing a picture of our erstwhile health secretary having a crafty snog with his girlfriend in the office.

It’s not my place to care nor comment about the ins and outs of politicians’ private lives – the clue is in the word private. Of course, Hancock was always going to have to fall on his proverbial sword, the Prime Minister was never going to sack him. Boris, whose own grasp of the marital ties that bind has, historically, been looser than might be expected, could not afford the cries of hypocrisy that such a firing would promote.

What does worry me is the presence of the hidden camera in the first place and the fact that the footage was viewed by someone who saw fit to send it to The Sun. Hancock clearly didn’t know the camera was there, or if he did, he’d forgotten. Who put it there, why did they put it there and who decided to cause immense hurt and distress to two families by selling it on? That’s what makes me feel uncomfortable, not the ickiness of the picture itself. With its grainy quality, it was like a bootleg copy of the start of a bad 70s German porno film. Yuk.

Dominic Cummings, muttering away on Twitter like a social-media Gollum, isn’t sure whether to be pleased that Hancock’s gone, or gutted that Sajid Javid, the Chancellor he helped to oust in favour of Dishi-Rishi, is now basking in the warmth of Cabinet, whilst he scuttles about in the Westminster wilderness. Tough. Reap, sow etc.

Anyway, on to more exciting things. My Twitter feed is full of announcements from companies across the industry, letting the world know they are closing up shop early for today, so that employees can get in front of a TV and watch England take on Germany in the Euros. Jolly good. Whatever happens this evening, whether Saint Gareth of M&S manages to inspire his team to victory or not, it will have a hard job to beat the excitement of the last few days. The Premiership final between Harlequins and Exeter Chiefs was an astonishing masterclass in how top flight rugby can be played and that seems a privilege to witness when it is. And I say that as a Saracens fan.

Then we had 19-year-old Jack Draper who played in his first main Wimbledon tournament, on Centre Court, against Novak Djokovic and who not only aquitted himself brilliantly, but managed to take the first set off the best player in the world.

Following that there was the 8 goal-fest that was Croatia v Spain and Switzerland not only scoring the 90th minute 3-all equalizer in Fergie-time, but then beating France, the team I had down to win, on penalties.

Then, of course, we have Murray. Sir Andy Murray, back on Wimbledon grass, through to the next round and battling with every fibre of his being not to throw away a two-set lead. I can’t remember a time when Monday night TV was this exciting. And we haven’t even got to the Olympics yet.

At least this picture (pinched from Instagram, sorry) is just what I needed to push that grainy Sun one out of my head 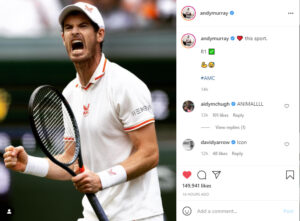 UPDATE June 29 18:45 : Well that was really rather marvelous. 75 minutes of ho-hum, here we go again and then…wham, bam, Thank you Raheem. And Grealish, And Pickford, And Kane. And the lovely Gareth. Never has a last 16 victory felt more like a total tournament win.