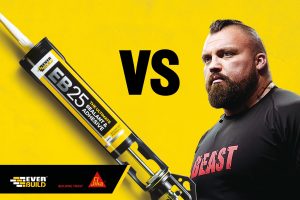 Sika Everbuild is teaming up with the former World’s Strongest Man, Eddie Hall, to promote its super strong EB25 ultimate sealant and adhesive as part of its new ‘EB25 Beast Lift’ challenge campaign. The campaign will run online from October right through to the end of 2022, and will see Sika Everbuild promote the super strength and versatility of its EB25 sealant and adhesive.

EB25 The Ultimate Sealant & Adhesive will bond and seal virtually any material to almost any surface, can be used indoors, outdoors and can even be applied in most weather conditions as well as underwater. It is also suitable for use in sanitary and food preparation areas thanks to its resistance to mould, chemicals and temperature extremes.