Selco raise the dough for charity

For each cake baked, Selco pledged to donate £10 to its charity for 2020, Global’s Make Some Noise.

Prizes were given for three winners, which included desert versions of a Selco delivery truck and the company’s Lightside Distribution Centre. 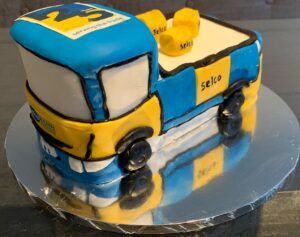 Global’s Make Some Noise – which is backed by some of the country’s largest radio brands including Heart, Capital, Radio X and Smooth – is a national charity that funds and empowers projects helping disadvantaged children, young people and their families.

The focus is on providing a voice to small charities which otherwise struggle to get heard.

Carine Jessamine, marketing director for Selco Builders Warehouse, said: “Our normal fundraising activity has been heavily affected in the first half of the year because of Covid-19 and the lockdown. We tried to think of a creative way to keep colleagues engaged during what has been a difficult time for everyone and this certainly generated a buzz amongst different teams. We had 100 entries and that included people from our leadership team, branch network and support centre and even colleagues who were shielding. There were some very impressive entries and selecting winners wasn’t easy but the most important aspect of it was that we managed to raise £1,000 for a fantastic charity in Global’s Make Some Noise.”