Psst: got any cement, mate?

The scene: A dark alley, at the rear of a builders merchant yard. Midnight. Somewhere in Britain.

One man sits in a dirty white van as another drives up and flashes his lights, twice.

They both get out of their vehicles.

Man 1: I could only get 10 bags of Bosscrete and five of Manycem. There’s nothing from Denex for a while, but there is a shipment of Konnam coming through at the end of the week though so I can get the rest then.

Man 2: What about the boards?

Man 1: Got you 10 sheets of 12.5mm but there’s no more until the next shipment in two weeks. And the price has gone up. You’ll need to pay double.

Man 1: Yeah, I know, mate, but it is what it is. I can only get you the stuff that I can get. I managed to get some ply though if that’s any good to you, and a couple of bags of Nettle LotsaFinish.

Both men open the back doors of their respective vans.

The two men transfer bags of cement and plaster and sheets of plasterboard and plywood from Man 1’s van to Man 2’s.

Man 1: What’s all this for anyway?

Man 2: Boss wants to finish off a house he started us working on in the first lockdown. Now that house prices have rocketed he wants to sell it as quick as he can.

They finish transferring the goods.

Man 2, peels off a huge pile of notes: That’s what we agreed, minus what you couldn’t get.

Man 1: It’ll have to do. But don’t forget, you’ll need to pay twice what we agreed for the rest of the cement next week.

Man 2: *expletive* I know it’s not your fault, mate. But my boss isn’t going to be pleased.

Man 1: I’ll WhatsApp you when the next lot comes through. But we may need to meet somewhere else. I don’t want to be seen too often in the same place.

Man 2: Just let me know. See you around.

Man 1: Yeah, see you when I get some more stuff.

Both men get back into their vans and drive off in different directions.

Don’t think this couldn’t happen. Hell, it probably is happening. 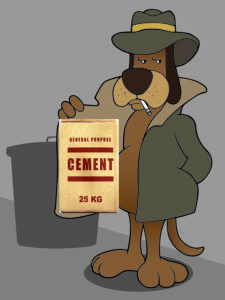