Builders merchant chain MKM has opened its 100th branch, with the opening ceremony at the branch in Bromsgrove performed by David Kilburn, the joint founder of MKM and Kate Tinsley, MKM’s CEO, watched by special guests ex-Aston Villa and England footballer Dion Dublin, along with Kevin Ward, Bromsgrove’s Town Crier.

MKM began life as a start-up business, founded in Hull 27 years ago,  and now has over 2500 employees, with branches right across the UK, except Northern Ireland.

Patrons from The Harry Bennett Foundation (HB9 Foundation)  – a local charity set up in memory of the life of a Bromsgrove teenager, also attended the event. MKM Bromsgrove has pledged its ongoing support to The HB9 Foundation, with Dublin presenting the charity with a cheque for £1500 on behalf of MKM.

The 100th branch opening will be followed shortly with openings in North Walsham, Lincoln North, Bury and Manchester.

Tinsley says: “It’s about providing the highest levels of customer service by employing local people who have the drive, knowledge, skills and enthusiasm to deliver this from premises built around today’s discerning customer.

“As local people serving local people, it provides MKM with the opportunity to play a significant role in the local community,” continues Kate. “The Bromsgrove branch is already working with local charitable organisations to assist in their fundraising activities.  As a business. MKM supports many hundreds of charities, local sports teams and community projects across the country.” 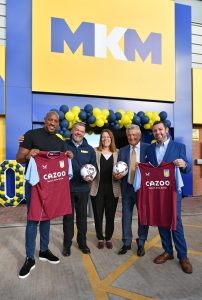 Group Managing Editor across the BMJ portfolio.
Previous Rowley named fourth housing minister in 2022
Next Be careful what you wish for… 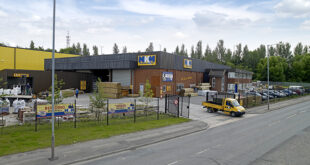 MKM refurbs and rebrands in Sheffield