Marsh Industries have raised £20,000 for children’s hospice charities by sending its festive mascot, Sooey Marsh, along the highways and byways of Britain. 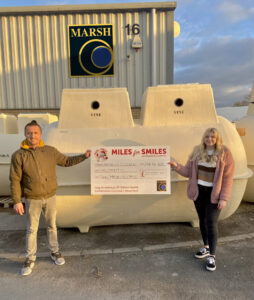 Sooey was recruited by Marsh to lead their ‘Miles for Smiles’ Christmas fundraising campaign from November 16 to 20. His mission was to travel 20,000 miles across the UK in five days with the Marsh Transport Team; bringing a smile to every person he met along the way.

Marsh Industries donated £1 for every mile travelled by Sooey.

Sooey smashed his 20,000-mile target on Friday 20 November prompting celebrations among the Marsh team and the children’s hospital charities that will benefit from the success of the Miles for Smiles campaign:

As Sooey criss-crossed the country he gained cult hero status on the Marsh social media channels with supporters sharing smiles and messages of encouragement. His daily blog on the Marsh website was also a popular page for supporters keeping up to date with his activities throughout his mission.

Mission Chief and managing director of Marsh Industries, Steve Boyer, said; “While they say laughter is the best medicine, I would also say a smile can help in most everyday problems. And I’m sure we can acknowledge that this has been a stressful year for many.

“We hope that the successful completion of Sooey’s mission has helped our friends, colleagues and customers raise a smile and we are delighted to donate some much needed funds for children’s hospital charities in the process.

“Thank you for sharing your pictures of Sooey and messages of support throughout his mission. These can still be viewed on our social media channels using the hashtag #SooeyMarsh. Well done Sooey!”

Sooey will return in 2021 with another ‘Miles for Smiles’ challenge.