Various Howdens depots have contributed to the donation of two kitchens to the new Regional Centre at FareShare Greater Manchester to support their staff and volunteers. The donation will also help with cookery demonstrations that form part of the charity’s aim to promote healthy food skills and nutritious meals.

On September 26, 20 employees from the North West region also took on the challenge of running the Manchester 10k. Between them, they raised £3,224, with Howdens offering to match it making the grand total £6,448. All funds were donated to FareShare Greater Manchester and will be put towards their new building – including a huge industrial fridge.

Charlotte Read, Reddish depot assistant manager, said: “We became aware of FareShare following Marcus Rashford MBE’s campaign to feed children during lockdowns and school holidays. What they do is truly astonishing and provides a much-needed lifeline for local families and organisations. Getting involved and donating our product was the least we could do to help this charity and we are excited about how many people it will help.”

Jo Cribbin, Cheadle depot manager, said: “I visited FareShare Greater Manchester for the first time and their vision and what they do was remarkable. It really is like a military operation as not only have they got to sort through food, but they are also responsible for its delivery or collection. We were over the moon to have 20 of us run the Manchester 10k, the atmosphere on the day was incredible. Raising over £3,000, which was then matched by Howdens, was remarkable and I know it will be put to such good use by FareShare Greater Manchester.” 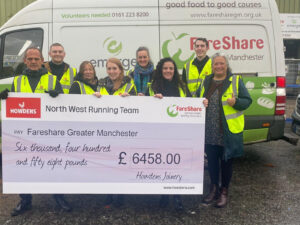 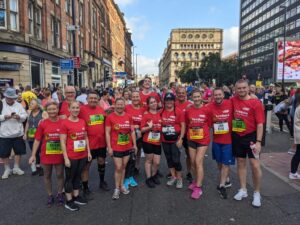