A team from independent builders merchant buying group IBC is riding from Land’s End to John O’Groats in March to raise money for the Unitas OnSide Youth Zone. In true pandemic style, though, the team will be doing it all without leaving their homes.

Alongside sister company C3, the IBC Buying Group has pledged to raise money for the OnSide Youth Zone charity, which provides venues and activities for young people across the UK to help them learn and develop vital life skills.

Led by commercial director Dave Robertson, the IBC team will be cycling the 980-mile course from Lands’ End to John O’Groats over nine gruelling days from 24th March to 1st April.

Robertson will be covering the full distance from his home, cycling the nine stages on a static road bike – and more than 100 miles every single day. He will be continuing his work with IBC at the same time, with the entire challenge streamed live online so that IBC colleagues, suppliers and members can join in, sponsor him and cheer him on – and even hold meetings while he is cycling.

Other IBC team members will also be taking part in many of the stages, with all sponsorship money raised going to the OnSide Youth Zone. IBC, as part of the AllNeeds Group, is proud to be a patron of the charity, supporting in particular the local centre Unitas, which is based in Barnet, North London.

A JustGiving page has been set up where people can sponsor Team IBC on their journey at www.justgiving.com/campaign/greatstridesforyouth. 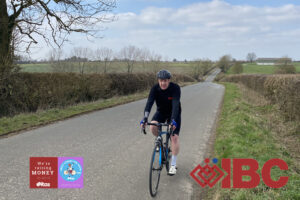