Throughout March 2021 staff at Grant UK took part in Marching March, a step-count challenge raising funds for the Wiltshire Air Ambulance. In total, the staff took over 12 million steps during March and raised a wonderful £320 for the local charity.

Throughout the month, interest in Marching March heated up with all participants doing their best to reach their personal daily step-count targets. Thirty-one days later, a total of 12,180,949 steps were taken by staff and a healthy sum of donations totaled £320 for the Wiltshire Air Ambulance. Three front runners were declared whose high step-count totals earned them podium positions in the Marching March competition – first place went to Charlotte Davey in the Training Department, second place went to Kevin Fossey, one of Grant UK’s Area Sales Managers, and third place went to Paul Applewhite from the Technical Team. 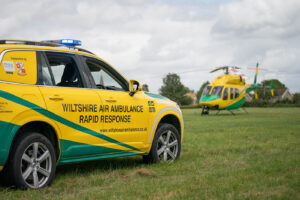 “It has been great to see everyone at Grant UK get involved with the Marching March step-count challenge,” says Anna Wakefield, Grant UK’s head of marketing. “Not only did it give staff the chance to raise some money for our chosen charity, but it was an initiative that aimed to get staff on their feet and take some time to focus on their own wellbeing, both physically and mentally. All participants received a wellness box of goodies from Grant UK and after seeing the number of steps taken, the amount of money raised and to see the conversation amongst staff, Marching March has been a success on many levels.”