“We have got to get on with insulating more homes because that’s the low-hanging fruit to make housing more energy-efficient”, Sir Edward Davey has told the Builders Merchants Federation (BMF).

“And we have to find ways to re-purpose gas heating to move to a net-zero carbon economy”.

The BMF attended an invitation-only City of London breakfast briefing to hear the Deputy Leader of the Liberal Democrats discuss the finance and economics of climate change prior to next month’s General Election. Ed Davey is also Shadow Chancellor and speaks for his Party on financial, economic and taxation policy. He told guests that apart from Brexit, tackling the climate emergency is central to Lib Dem thinking. 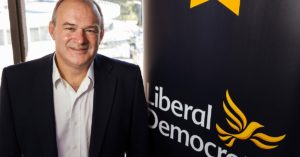 Brett Amphlett, BMF Policy and Public Affairs Manager, asked if the Shadow Chancellor was willing to intervene in the tax system and give Enhanced Capital Allowances to help manufacturers bring to market the materials and products needed to decarbonise heating and electrify homes. His answer was an emphatic yes.

Sir Edward wants more done to re-purpose gas boilers and noted work being done by BMF members to develop boilers that burn either hydrogen or hydrogen-blended fuel. The question is whether it is achievable. If hydrogen is the answer, he said he supports tax relief for businesses to help bring to market heating that does not use fossil fuel and to scale-up to meet demand. But carbon capture and storage projects are also needed in the production of hydrogen, he added.

Ed Davey reflected on his time as Energy and Climate Change Secretary in the 2010-2015 Coalition Government. He recalled his frustration than in trying to make two different – but complementary – regulations on energy efficiency and on heating work better together to benefit consumers.

The Shadow Chancellor has met Brett Amphlett and the BMF several times before – most recently at the Lib Dem Party Conference in Bournemouth two months ago. He thanked the BMF for all its work in trying to overcome problems surrounding the Green Deal before it ran into difficulty and eventual closure in 2015.