Therefore all things whatsoever ye would that men should do to you,
do ye even so to them

Hands up if you know anyone who rigorously stuck to every single Covid guideline during 2020 and 2021? No, me neither. During the first lockdown, the period history will term the Time of the Great Andrex and Pasta Famine, when we were all supposed to be sanitising our shopping and queuing to get into Asda, I suppose most people did. Although I’m pretty sure there may have been one or two days when I went to the supermarket and out for a run ON THE SAME DAY.

However, it’s a truth that seems to have universally been forgotten, that once Dominic Cummings went on that Barnard Castle jolly, the jig was up and we all realised that this government is quite happy to make things up as it goes along.

This bunch of Conservative politicians really do seem to be the party of: ‘I’m alright and to hell with the rest of you.’ I know, in the great universal scheme of things, it probably seems trivial to be getting so up in arms about whether there was or wasn’t a ‘party’ in 10 Downing Street last Christmas (Spoiler alert: there WAS a party. More than one), but it’s what that event and the subsequent denials/outright lies signify that really grates. It doesn’t matter whether the Prime Minster was there or not (although, it appears he was at a different ‘leaving event’ at another time. Also banned). The point is that it happened at a time when the papers were full of similar events being raided by police with fines of £10,000 being handed out to the organisers.

Let’s be clear: the government’s own guidance at that very time was that such events should not happen if the primary reason was social. At that Downing Street Not-A-Christmas-Party they did Secret Santa. That’s about as social and pre-meditatedly Christmas party-like as you can get.

And, as the ITV News video of Allegra Stratton, the Prime Minister’s then press secretary, laughing about the fact that they’d had a party, that emerged yesterday shows, they couldn’t care less. They didn’t give a damn last Christmas and they don’t give a damn this Christmas.

There was a party held in 10 Downing Street that was against the law and the government’s own guidance at a time when a great many other people were prevented from seeing their own families by that very guidance. Just three weeks earlier I had said my goodbyes to my brother-in-law, not the way I should have done, in the pub, with a few drinks to remember him by, sharing reminiscences and grief in the company of his friends, colleagues and family, but behind a mask, standing in the cold outside the crematorium with 29 other people, all standing two metres apart.

Did no-one in Downing Street stop to think: you know what, after Dominic Cummings and that Barnard Castle episode, we really shouldn’t be seen to be doing this. It’ll backfire on us. Did they really not give a damn, or are they so stupid that it didn’t occur to them that anyone would notice? There are some mainstream media outlets that have been very quiet on the subject, so I guess we can work out which newspaper owners were on that guest list.

Why has it come out now? Partly because of some very fine journalism, step forward Pippa Crear at the Daily Mirror, and ITV News, and partly because there are some very pissed off people at the heart of Whitehall who have simply had enough of the cronyism and the disregard for the rules.

To be a good leader you need to have empathy. You need to understand what it must be like for those you are leading. This government can’t even spell empathy.

To put this in perspective. A 95-year-old lady attending the funeral of the man she had been married to for 73 years, sat in a pew on her own, unable to be comforted by those closest to her, because she was following government guidance. 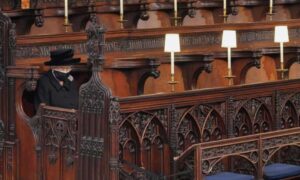 Group Managing Editor across the BMJ portfolio.
Previous BLANCO UK appoints Jones as MD
Next Makita tunes in on site