A Brett Landscaping team member has raised thousands of pounds for charity after a huge challenge climbing Africa’s highest mountain. 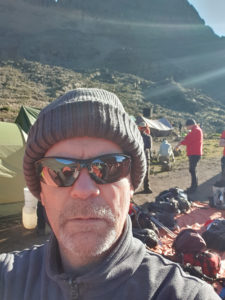 Bushell has been with Brett since 2011, having previously worked at Marshalls, Holcim and Pavement Solutions. So far he has raised more than £3,000 for Asthma UK after he climbed Mount Kilimanjaro.

Bushell said: “It was an unbelievable 10 days and tougher than I ever imagined. We were walking for up to 17 hours a day in temperatures ranging from +28 degrees to -18 degrees.

“The terrain was difficult, but the effects of altitude sickness and lack of sleep and food were worse. The feeling you get at the summit makes it all worthwhile.

“Three people die in the UK every day from asthma so it’s definitely worth it. My next challenge will be the rescheduled London Marathon so I’m hoping to raise even more to help fund cutting edge research into asthma.”

Bushell is hoping to raise even more money for this worthy cause – to sponsor him see http://uk.virginmoneygiving.com/MarkBushell2