The team is currently top of the Eastern Junior Alliance Under 14 Green Division having won nine matches out of nine and remain in all cup competitions.

Kevin Stanbridge, team manager, said: “The team has been performing brilliantly on the pitch and the missing piece of the jigsaw has been new kits.

“We have been playing in strips handed down from higher age groups which has been great but to have new kits is such a boost.

“We have been searching for a potential sponsor and Martine King, a parent of one of our players, has been very busy contacting local businesses seeking support. We were thrilled when Selco came forward.

“It’s a major national company with a very local presence through the branch in Basildon and the lads are delighted to be playing in their stylish new kits.

“Hopefully it inspires them to continue the great form they have been showing this season.”

Selco Basildon branch manager Mark Kelly said: “We are thrilled to be supporting the young footballers at Bowers & Pitsea. It’s a local club which provides a brilliant sporting platform for local youngsters and we are excited to see the team carrying our name.” 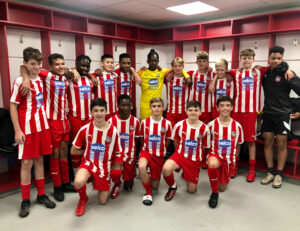