A Scottish builders merchant has opened of one of the country’s largest hard landscaping displays, with the opening performed by former Prime Minister Gordon Brown. 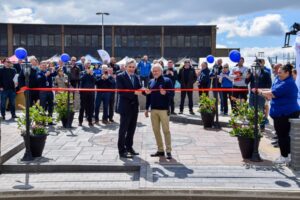 Cartmore Building Supply Co Ltd has opened a new 1,000 square-metre area in Lochgelly with the former Prime Minister’s help. The event showcased Cartmore’s latest expansion, which has been fuelled by the company’s Partner status within the National Buying Group (NBG).

Gordon Banks, director and co-founder of Cartmore, said: “Having a display like this is fundamental for any landscaping business, and after we moved to new premises in May 2021, we wanted to ensure ours was state-of-the-art. We are very proud to now own one of the biggest such displays in Scotland and were very honoured that Gordon was able to officially declare it open for business.

“Our continued upwards trajectory would not have been possible without our involvement with NBG. Being an NBG Partner is a crucial part of our business model, as it allows us to compete at the top table with nationals when it comes to pricing. This is why we are the group’s longest continually serving member in Scotland and we look forward to our future in collaboration with NBG.”

Gordon Brown said: “Landscaping is highly visual by its very nature, so being able to demonstrate how a project will look when it is finished is extremely important.”

“As such, we anticipate the fact contractors now have a highly effective and accessible tool here at Lochgelly will lead to more work in the area. We are proud to be able to drive local business in this way, and this would not have been possible without our total commitment to NBG.”

Nick Oates, managing director at National Buying Group, added: “The NBG is proud to have counted Cartmore as a Partner for so many years, and to have witnessed its continued success.”

“They stand as a great testament to what is possible for businesses working within the buying group model, and we look forward to seeing the further growth they will experience having opened this new and impressive landscaping display.”