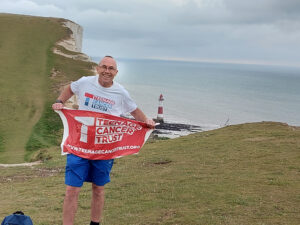 Stuart Chappell, who works at Parker Building Supplies’ Uckfield branch, has been named ‘Legend of the Year’ by The Teenage Cancer Trust at The Altogether Unstoppable Awards.

Chappell was nominated for the award by his colleagues following his fundraising efforts. In 2021 he walked the equivalent of over two marathons, across the South Coast from Eastbourne to Bognor Regis with an overnight stop at Shoreham. A seasoned fundraiser, Chappell has undertaken a number of previous challenges for Teenage Cancer Trust, including a wing-walk and abseiling down Portsmouth’s Spinnaker tower in 2019.

Stuart Chappell said: “The last couple of years have been tough for charities that often rely on large scale events to raise money, so I’m delighted to have been able to do something to support such a deserving cause. Seeing my final total made every blister worth it and even made up for the extra four miles I walked having miscalculated my route on day one!”

Allun Pittingale, Parker Building Supplies’ managing director, said: “Well done and huge congratulations to Stuart. He is a true inspiration and we are so proud of what he has achieved.”

Parker Building Supplies’ 19 branches across Sussex and Kent have been supporting Teenage Cancer Trust for several years, raising in excess of £150,000.

Every day, seven people aged 13-24 are diagnosed with cancer. Teenage Cancer Trust is the UK’s only charity dedicated to providing world-class cancer services and support, so that no young person has to face cancer alone.