Let them eat cake…oh wait, what?

Now does he feel his title
Hang loose about him, like a giant’s robe
Upon a dwarfish thief…

There are so many things to be concerned about happening in the world right now that really should be putting Cakegate into perspective. But we – the embittered electorate and the mainstream media – have got our teeth into it now (see what I did there). It looks like we won’t let up until we know exactly who partook of the Colin the Caterpillar cake (other cakes are available) and whether 30 people singing Happy Birthday, eating cocktail sausages and a slice of Colin to someone who was ‘only in the room for 10 minutes’ was against the law or not. It was against the spirit of the law, that’s for sure. 10 minutes is about the time it would have taken to sing two hymns at my brother-in-law’s funeral. Just saying.

So, more important things: such as the impending war in Ukraine. People will die on that border because Putin’s habit of throwing his weight around has got out of hand. I don’t know of he imagines he’s the Czar, a latter-day Stalin or Thanos, it’s blooming scary.

Russia and Ukraine might seem a different world to us but, in a global economy, what happens outside our borders affects us. Had a look at your gas costs lately? Wholesale energy price rises have been fuelled (sorry) by stuff happening in Russia as it is, the situation escalating is probably not going to do much to bring them down again.

Plus, with shipping costs for imported goods from the far East going through the clouds (having already gone through the roof, you see), is anyone going to really want to turn to the Trans Siberia Express as an alternative, with all that unrest going on? I’m not sure I’d risk it, so the costs of imported goods are likely to carry on increasing.

The energy price cap, finishing in April, is going to impact thousands of people on standard variable tariffs, who will see the costs of the domestic energy bills rocket. With 40 energy suppliers having tanked in the last year, that’s most of us reaching for another sweater and the fluffy socks.

The response to the Covid pandemic cost the Treasury dear, not least because, in the words of Lord Agnew when he resigned in disgust this week, the response to the astonishing amount of fraudulent claims made has been “lamentable”. That empty purse of Dishi Rishi’s is going to have to be refilled somehow and by someone. Us, mainly. Yep, all that time spent on furlough in the garden, building the patio kitchen came at a cost. Payback’s a bitch and it starts in April. Income tax, National Insurance, VAT (for the hospitality industry at least): all going up.

A lot of people – the Government included – will have less money in the next few months, and that is likely to trickle through to the industry in terms of a tightening of belts at some point. Unless there is a massive push behind the National Retrofit Strategy of course, should the Government heed the demands of Insulate Britain (remember them?), or, alternatively, reduce the rate of VAT on energy bills, which some are calling for. Or, even better, take up the idea of the Energy Saving Stamp Duty Incentive. Just because an idea has been long mooted doesn’t stop it from being brilliant. The Energy Infrastructure Group certainly thinks so.

I don’t intend to be all Private Fraser about 2022, the latest CPA forecasts are looking challenging, but not dire, after all. Some sectors will do OK, some people will do OK. Others won’t.

Finally, because, as  a member of the media, I can’t let this juicy bone go, there’s a report in the New Statesman today that claims Boris and Carrie Johnson are “bemused” at all the flack they are receiving, convinced that they did nothing wrong with the gatherings. As far as they are concerned, it seems, the Downing Street ship, and all who sail in her, were just part of one ‘household bubble’ and, therefore, permitted to mix. That’ll be the properties known as 10 Downing Street, 11 Downing Street, 12 Downing Street and 70 Whitehall, all linked, and between which the chosen ones can flit at will, without having to do anything as pedestrian as go out of one front door and in through another.

Hmm. Those properties, like the one below, have about 100 rooms between them. That’s one huge ‘household’. 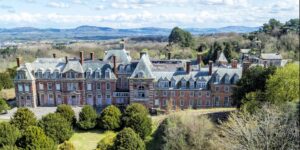