Nicholls Building & Timber Merchants successfully implemented and opened a new Distribution Centre on the outskirts of Witney, Oxfordshire. The centre will relieve pressure on the existing Nicholls Building & Timber branch in Kidlington, Oxfordshire. Allowing branch staff to focus on servicing inbound and collect customers whilst maximising fulfilment of customer deliveries via the Distribution Centre.

July 2019 also marked the next stage of expansion for J&Bs the Dorset based Plumbing & Heating Merchant owned by the Nicholls Group with the opening of a new Branch and Bathroom Showroom in Ringwood, Hampshire.  J&Bs was originally acquired by the Nicholls Group in 2014 as a three branch merchant. Ringwood is the seventh Plumbing & Heating branch and fifth Bathroom Showroom for J&Bs. 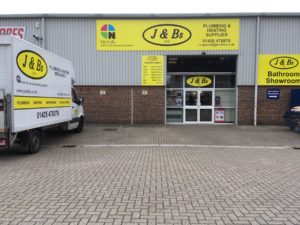 Andrew Nicholls Chief Executive said ‘Our Kidlington branch had reached capacity, so the distribution centre has enabled us to move our delivery fleet out of the branch. The Kidlington branch staff are now solely focused on giving the best service to our collecting customers. A combination of faster delivery, improved order fulfilment, and enhanced stock ranges have led to a 15% increase across collect and delivered business since the opening of the new distribution centre. We will continue to expand the fleet of vehicles based at the Distribution Centre over the course of the next six months with two additional vehicles due for delivery late summer 2019’.

‘The new J&Bs Plumbing & Heating branch and Bathroom showroom is on the site of a former independent plumbing merchant in Ringwood and provided a fantastic opportunity to expand the J&Bs network. We were fortunate enough to retain a selection of staff members from the previous merchant coupled with some of the existing J&Bs team moving to the branch, which giving us a fantastic platform on which to develop the new branch and showroom’.

I'm the Assistant Editor on BMJ. If you have any product or people information, or some news you'd like to share, please feel free to email me.
Previous JP’s New User-Friendly Website
Next Pavestone rally: the convoy continues