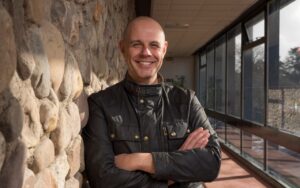 TV and radio broadcaster, Jason Mohammad, will host the 2022 BMF Members’ Conference and Awards in September, which takes the theme ASPIRE, INNOVATE & THRIVE.

Mohammad is a highly experienced live host, presenting BBC One’s Final Score and Radio 5 Live’s football phone-in 606, as well as fronting BBC coverage of snooker, rugby and the Olympic and Commonwealth Games.  Away from sport, Mohammad has a morning radio show on BBC Wales, has co-hosted Crimewatch and presented Wales Children in Need as well as Wales Sports Personality of the Year.

Making another popular come-back, the BMF’s annual Members’ conference returns to St George’s Park, Burton on Trent, the venue for the event in 2018 and 2019. This is not the first time Mohammad has appeared for the BMF, as he was a well-liked compere at last year’s All Industry Conference.

BMF CEO, John Newcomb, said: “I’m sure everyone who saw Jason in action at last year’s All Industry Conference will be as delighted as I am that he is returning to host our flagship Members’ Conference and Awards, which is once again taking place at the home of England’s national football teams, one of the most popular venues for the event in recent years.”

The BMF Members’ Conference and black-tie Awards Dinner takes place on September 15 at The BMF’s annual Golf Tournament and other social activities will be held on the previous day, September 14 at the exclusive JCB Golf and Country Club.