Pearson, from Godstone, turned profession in 2019.  Classed in the featherweight division, the bricklayer has been a customer of Fairalls since he joined his grandfather’s building firm aged 16. Dubbed ‘the Pocket Rocket’ due to his small stature and impressive fighting record, Pearson is currently in training for his fourth professional fight on February 12. 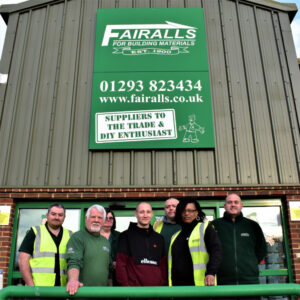 Luke Pearson said: “It is great to have Fairalls’ sponsorship, especially as many of the team at the Godstone branch have known me since I was 16.

I was born with a hole in my heart and my parents were told I’d struggle with sport – thankfully that has proved not to be the case. I have always been really fit – a day’s bricklaying is like another training session in itself! I was 19 when I started boxing and took to it right away.”

Branch Manager, Alastair Philips, added “We are extremely proud of Luke’s achievements. As such a longstanding customer we are delighted to be able to support him and look forward to cheering him on at his next fight.”

Pearson’s next fight, promoted by Dean Whyte, brother of World No.3 Heavyweight Champion Dillan Whyte, takes place in Tolworth on February 12.  There are ten fights on the bill, tickets cost £40 and are available from Fairalls, Godstone High Street.