ex-Speaker to speak-up at BMF Conference

John Bercow, the former Speaker of the House of Commons has been announced as Keynote Speaker at the BMF All Industry Conference 2021 next June. 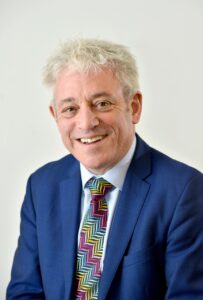 Bercow entered Parliament as Conservative MP for Buckingham in 1997 and was appointed Shadow Chief Treasury and then Work and Pensions Secretary before resigning to support the Labour Government’s policy to allow unmarried gay and heterosexual couples to adopt.  He is, however, best known as Speaker Bercow.

Having been elected to the role with a mission to “strengthen the backbenches and recognise that Parliament is more than a rubber-stamping operation for the government of the day”, he built a reputation as a reformer and was re-elected three times.  During his decade long tenure he served four Prime Ministers and extended the time for Prime Minister’s Questionss and increased the use of “Urgent Questions”, requiring Ministers to make 685 statements on pressing issues.

As Speaker, Bercow had to be neutral but now there are no such constraints on his views, which should make for a memorable Conference address.  As well as his Saturday morning speaking session, he will also join BMF members on Friday night’s Dine-Around.

BMF CEO John Newcomb,  said: “In the year that the UK begins a new relationship with the European Union and in the wake of the disruption caused by Covid-19, we are delighted that John Bercow, who was at the centre of Parliament for a decade will share his opinions with Conference.

“This session always draws a full house, and John follows in the footsteps of other political heavyweights including Michael Portillo in 2013, Alistair Campbell (2015), Paddy Ashdown (2017) and John Prescott (2019).  I have no doubt that John’s address will once again be one of the highlights of our Conference.”

The dual-centre BMF All Industry Conference 2021 takes place in Harrogate and York from 17-20 June.  The final merchant places and supplier packages are selling out fast. Book yours at www.bmfconference.co.uk or contact June.Upton@bmf.org.uk