On 31st August, CCF employees donned their walking boots ready for a trek along the Hadrian’s Wall, in aid of Alzheimer’s Society. 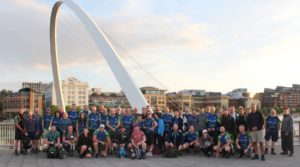 A total of 54 colleagues from CCF came together to begin their long journey in Chollerford, Northumberland. Stretching from east coast to west coast Britain, Hadrian’s Wall took six years to build. The wall was completed in 128 AD by the Romans, to protect the Roman Empire from the Barbarians. It was made a World Heritage Site in 1987 and 20 English Heritage sites are situated along the length of the wall.

The walk is just the latest activity the CCF team has participated in to raise funds for their chosen charity, the Alzheimer’s Society. To date the walk alone has raised over £20,000, thanks to the dedication of the walkers and their sponsors.

After walking for over 26 miles along Hadrian’s Wall, the team members finished up with the last leg of their walk alongside the River Tyne, leading them into Newcastle-Upon-Tyne city centre.

Those involved had to complete an elevation of 900 feet within the first five miles.

Dean Pinner, managing director at CCF, said: “It’s wonderful to see all the staff getting involved in raising money for the Alzheimer’s Society. We have been supporting the charity since 2016 and it’s a cause close to many hearts, as most people have experienced the devastating impact of the condition affecting a loved one.

“To be able to work together to provide support for those suffering, creates a wonderful feeling of unity amongst staff. It was great to join forces with B:Well Group CIC to get the team involved in the fundraising challenge. The organisation hopes to continue to participate in events aimed to raise awareness and funds for Alzheimer’s Society.”