Jayson Richards from City Plumbing Supplies and Jade Terry of Naylor Industries walked away with the top prizes at the BMF’s prestigious Young Achiever of the Year Awards last week. 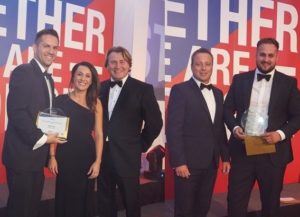 BMF CEO, John Newcomb said: “The Young Achiever of the Year Awards were launched in 2013 to recognise and reward talent, commitment, innovation and achievement amongst the next generation of BMF members.  They provide a huge confidence boost not only to the winners, but to all those nominated for an Award.  Once again we were delighted to see such a wealth of young talent within the industry and choosing the winners was a tough task.  Our congratulations to them all.”