Landscapers from the charity Band of Builders (BoB) have volunteered to build an outside space for Tess Robinson, a South Shield woman who hit the national news headlines after her dog alerted her to ovarian cancer.

Tess hit the headlines after telling reporters that if it wasn’t for her dog Lola jumping on her stomach and smelling her breath, her low-grade serous carcinoma (LGSC), a rare form of ovarian cancer, may have gone undetected for longer. In March 2021, Tess underwent a 12-hour operation to have a full hysterectomy and during the surgery, it was evident that cancer had spread to Tess’s bowel. Thankfully, recent tests have confirmed that the surgery and subsequent chemotherapy have been successful – but it’s still a long road back to health for Tess. 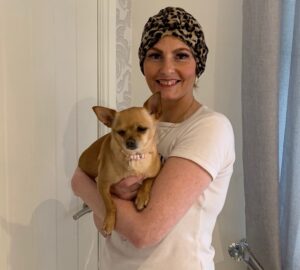 Friends of Tess told her and her husband – who is a plasterer – about the support offered by BoB, a registered charity that completes practical projects to help members of the UK construction industry who are battling illness or injury. The charity has offered to landscape the Robisons’ back garden, a new decked area will be built to make it a relaxing space for Tess to continue her recovery from chemotherapy.

Half a dozen tradespeople – who are part of the BoB community – have answered the call and volunteered their time for free to complete the project, which will take place on the weekend of March 19-20. This will be the 23rd project to date by the charity.

BoB has more than 10,000 supporters from across the construction industry and is backed by major names within the industry, including DEWALT, Jewson, Tarmac, Gibbs & Dandy, V12 Footwear, Talasey, Resideo and Haemmerlin. These local suppliers will donate materials for the project.

Kent Taylor, project lead, said: “The Band of Builders community never ceases to amaze with its ability to rally round and volunteer on projects for fellow tradespeople and their families, working on renovation or repair projects that make a real difference to their lives.”