The tournament was held at Horsley Lodge Golf Club, Derbyshire, with around 80 players taking part from various organisations, customers, suppliers and partners.

Entrants were split into teams of RRT England and RRT Rest of The World to battle it out for the RRT Ryder Cup Challenge Trophy. In the end it was the RRT Rest of the World team that won, with 11 points to 9.

Russell Roof Tiles, which has three sites, two in Burton on Trent and another in Lochmaben, Scotland, have been running the event since 2016. With the absence of last year’s tournament due the pandemic, they have so far in total raised £27,500 through the golf day.

Ross Hayward, area sales manager at Russell Roof Tiles said: “We were delighted to see the annual charity golf tournament return this year. It enables local partners and customers to come together to have some fun around the course, whilst importantly raising money for a local cause.”

“I would like to thank everyone that came along and helped to raise such an incredible amount.” 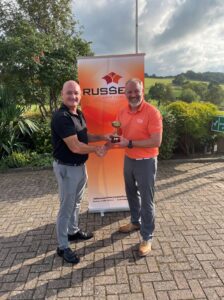