You maniacs! You blew it up! Damn you!

Yes I am a dreamer For a dreamer is one who can only find his way by moonlight, sees the dawn before the rest of the world.

Complaining about the weather is a very British pastime: it’s too cold, it’s too wet, it’s too foggy, too snowy and now, too hot.

Yet this week we are having to deal with extremes that we have never experienced before. Not even in the long, hot Summer of 1976. Temperatures of 40+degrees C as predicted for Cambridge today are unprecedented and, it seems, likely to become more common. Yes, they regularly have similar temperatures in other places around the world. But they are geared up for it. In the hottest parts of Greece in the Summer months, the offices are open from 7am to 1pm, after which people go home for a sleep, a swim, or just to sit somewhere cool. We buy a Boots Meal Deal and go and bake in the nearest green space for an hour and then wonder why we can’t concentrate back in our non-air-conditioned offices.

We have spent so much of the past decade talking about the need to insulate our homes to prevent us using too much energy to heat them in  the winter, that we have forgotten that the need to keep them cool is just as important. Over-heated buildings are generally worse for one’s health than under-heated ones.

Climate change, a very real thing which is not going away, EVER, means we are going to have to think differently about how we construct and refurbish our buildings. If only there was a building that was expressly designed to demonstrate all the ways that we could be building to not only mitigate our effect on the planet as far as possible, but which would also be an inspirational design and an educational facility.

There was. It was in Leamington Spa. It was called the Sustainable Building Center and it was the brain-child of Tim Pollard, then head of sustainability at Wolseley plc, and something of an evangelist in terms of sustainable building.

The Sustainable Building Center was three years in the making and opened in 2008. But it wasn’t just about saving the planet. It was designed to showcase products and building solutions that were useable, available and, more importantly, profitable. “I’m not a tree-hugger,” Pollard told the Industry Conference in June 2007, “I’m a builder’s merchant. I want to make money.”

The redoubtable Pollard, and his building – Wolseley may have been the owners, but Tim really ‘owned’ that concept – were ahead of the curve, ahead of their time. It was a building that, to any of the 10,000 visitors over the 10 years it was open, said: “Look at what we can do if we really put our minds to it.” It said to builders, to architects, to plumbers and specifiers “We can already do good stuff, but let’s do better. Let’s be better. Let’s make the world a better place.”

It was demolished last month. Closed by Wolseley in 2018 when priorities changed and then sold to developers who bulldozed it. That something so ground-breaking couldn’t be recognised as such by the bean-counters and pen-pushers that make these decisions without regard to anything beyond the year-end spreadsheet and the share-price hurts my soul.

The Sustainable Building Center was never open to the general public; it was always a business-to-business operation. Maybe that was a mistake. Having Joe Public in to business premises is hassle, sure, but what if it had served to inspire more end-customers? What if those home-owners then went to talk to their builders and plumbers about better ways of building, or fitting out their homes with products and technology that could, in the fullness of time, mean they were slightly better off in an unprecedented July heatwave?

It was ahead of its time, but I’d like to think that some of those 10,000 trade visitors were inspired to re-think how they planned and constructed their buildings. I’d say that’s a pretty good thing to have had on your CV Tim. I raise a glass of pink gin to your vision. 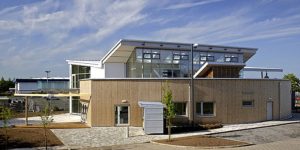 Tim has written about this in Installer this week. 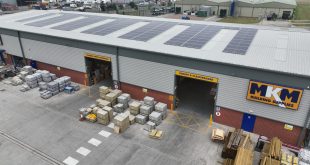 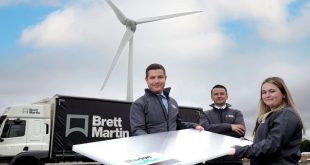