The MP for Brent Central Dawn Butler, who is Shadow Secretary of State for Women and Equalities, showed support for her local builders’ merchant on a visit to London Reclaimed Brick Merchants’  head office last week.

She met with Manager Sophie Wilbraham, her sister Aimee and other office staff to discuss LRBM’s work as a family business in the reclaimed brick and building supplies industry.

Butler praised the two sisters for having taken over the day to day running of the company from their father, CEO Stuart Wilbraham and took a liking to the main office’s reclaimed Mixed Stock feature wall.

The Shadow Secretary also spoke with staff about the process of brick reclamation, LRBM’s delivery service and the increasing popularity of “industrial chic” feature walls in cafes, restaurants, homes and workplaces.

So impressed was Buter with her visit that she tweeted about it afterwards: “Wonderful fun visit to [London Reclaimed Brick Merchants] so impressed with the sisters who have taken over their father’s business. Plus the office was so cool. If you want a feature wall you know where to come. #Brent #womeninconstruction” 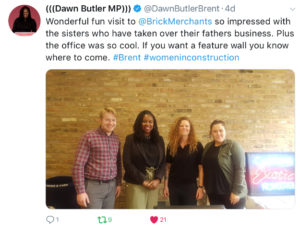